Soccer 7s is a soccer/football tournament that takes place at British International School, Phuket (BISP), and I’m glad I was part of it. It is SO much work, but the experience surpasses all expectations every year. This year, it was intense.

After several gloomy, rainy days in Phuket, the sun finally shone bright as could be. That’s exactly what I was hoping for, as I was going to be taking video footage – and cloudy days and videographers never mesh well. 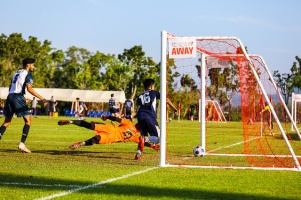 School spirit was at an all-time high, and everyone was on their feet. Food vendors from all over Phuket had set up stalls to cater to the ravenous crowds and use the opportunity to ride the high. Students and teachers from the school’s music department were entertaining the crowd during lunch and break times and 4 aerial displays over 2 days were set up by two performing companies – the relatively young ‘Phuket Gymnastics‘ and the more seasoned ‘Mid-air Circus Arts‘. Athletes, young and old, were cheerfully mingling, kicking around footballs, and having a good time all around. Parents and visitors were enjoying snacks, taking pictures, socializing and basically enjoying a very large picnic spanning over 14 active football matches over as many fields.

I enjoy such work days. It saves me from becoming a complete desk jockey and reminds me that there’s so much to experiment on in terms of marketing and shooting videos. I bought my gimbal and s8 especially for these occasions, and for my own personal videos of course. My trusty work-issued mavic pro’s good for drone shots in the morning, and the gimbal for action shots of the players and panning shots of the area on the whole. Also, it’s always fun to have a face-off with kids and adults in the crowd on camera… I usually get some pretty funny reactions!

This was a 2-day affair (and pretty exhausting too), but we managed to pull off a tribute to the legendary Freddie Mercury on his death anniversary (November 24th) during the awards ceremony with a ‘We Will Rock You’ stint (of sorts). To everyone’s delight, students, teachers, staff and parents joined in to sing and clap and stamp their feet along to one of Freddy’s most crowd-pleasing tunes.

It’s safe to say that nobody does it like BISP. The beautiful (not to mention enormous) campus, the enthusiasm of the students & teachers, and the school’s overall knack of putting on a great show is sometimes hard to do justice to with words. It’s just one of those things you have to experience for yourself.